History of the APA

History of the APA 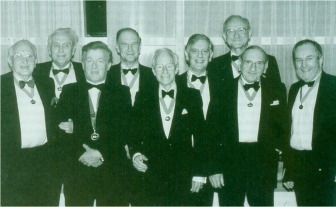 In the summer of 1973, Drs Gordon France and Douglas Shannon proposed the formation of an international paediatric anaesthesia organisation. Difficulties were foreseen and moves were instead set in train in the U.K. to form a more local association. Meetings of prominent paediatric anaesthetists were held in the Oriental Club, London. A steering committee drew up a draft constitution following which the inaugural meeting of the Association of Paediatric Anaesthetists was held in Bristol in late September.

Dr Robert (“Bob”) Cope was elected first President. Bob was born in 1910 and qualified in 1935. He obtained the D.A. in 1937 and was elected FFARCS in 1948. Prior to World War II he was appointed to various London hospitals, including the Hospital for Sick Children, Great Ormond St. (GOS). During the war he served as advisor in anaesthesia, GHQ Middle East Forces. Afterwards he was appointed to University College Hospital (UCH) and subsequently confined his activities to that institution and GOS. He later served on the board of the Faculty of Anaesthetists and as President, Section of Anaesthetics, Royal Society of Medicine. He was an internationally renowned paediatric anaesthetist and published on anaesthesia for children, anaesthesia in war and medicolegal matters.

Bob completed his term as APA President at the 1976 Annual Scientific Meeting. He passed away just a couple of weeks later having collapsed during a vigorous debate at an anaesthetic meeting in London. His UCH colleague David Endersby wrote the following in an obituary, published in the British Medical Journal in May 1976; “Numerous friends at home and overseas mourn his passing and we will remember him for his warm personality, his kindness, and not least his courage”.

The APA is 40 years old in 2013. As we look forward to our 5th decade it is also useful to reflect on how our association has developed since 1973. Thanks to the work of Dr Declan Warde, the APA archivist, we will over the course of the next year post material here to give a flavour of this history.

The 2010 Annual Scientific Meeting in Glasgow co-hosted by the APA and the Canadian Pediatric Anesthesia Society was the most recent example of the APA’s long involvement in joint meetings, held both at home and abroad, with kindred spirit organisations.

The APA has for many years conferred honorary membership on paediatric anaesthetists and others who have made an outstanding contribution to paediatric anaesthesia. One of the first to be accorded this honour was Thomas Phillip Ayre (1901-1979).